Most of us have heard about the term "Truth Serum," also called "Narco-Analysis," which has become one of the prime methods for crime detection or getting the truth from the suspect. Though there are always questions about the accuracy and admissibility of this test in the court of law, however, despite all controversies, it has become one of the widely used methods along with POLYGRAPGY (Lie Detection) and BRAIN MAPPING to get revealed the truth from the accused or the criminal.

Generally speaking, it's a kind of psychotherapy performed on a person by administering certain drugs, placing the person in a semi-sleep state. A person can usually lie easily, but in this test the subject's self-consciousness is allowed to sink by intrusion into his nervous system. In such a situation there is an attempt to extract information in the form of hints about the crime as it becomes extremely difficult for the subject to lie under the influence of drugs. This test is therefore a scientific technique for obtaining information from an individual in a natural state of sleep, and a person can not lie using his imagination.

Two most common drugs are used to put narco-analysis into action, and these are sodium amytal, also known as amobarbital or amylobarbition, and sodium pentothal, commonly known as thiopental or thiopentone used by psychiatrist in the controlled conditions on the subject to put him/her in the state of semi-sleep, so he is neither fully conscious nor unconscious, thus loses the ability to manipulate the answers from his consciousness. These drugs work on the principle of inhibiting the brain's process of thinking filtration. The narco-analysis is considered as the combination of hypnosis and narcosis. In a short time, the psychiatrist could gather more details of menial contents. Without large doses of sedative drugs, narco-analysis produces sleep. 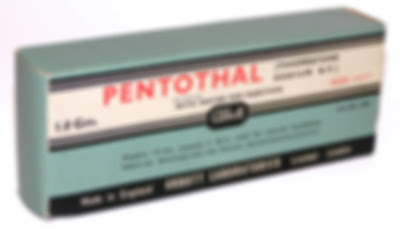 The theory behind this is that when we lie, the brain processes our thoughts and chooses what to show and what to unreveal by the subconscious. A person can no longer sift his idea by applying this procedure and is supposed to speak the truth, or so.

How the test is Conducted?

Narco-analysis test is conducted by 3 grams of Sodium Pentothal dissolved in 3000 ml of distilled water and the solution is intravenously administered along with 10 percent of dextrose over three hours with the aid of a trained anaesthetist. It is a barbiturate (thiopental sodium) that makes the neuronal membrane more permeable to chloride ions, leading to general inhibition, beginning with the cortex and progressing down to the lower brain regions with increasing biological effects to produce an alcohol-like disinhibition with only neural inhibitory effect. Hypnotist, who then has to frame certain leading question and evoke response in a way likely to produce accurate answer in the presence of the investigators, and forensic experts.

In short the person is quite close to unconsciousness, and is

•Mentally incapable of resistance to questioning

Important things involved in the tests are:


(v) A psychiatrist, hypnotist, anesthetist, a legal authority, and investigator.


(vi) The dose depends upon the suspect’s sex, age, health (physical and mental).

Every test is recorded in a video. How dosage was given to the subject, what questions were posed to him, what was his response, every minute detail is documented while the test is being performed. Entire process is recorded for the purpose to be presented in the court-room unbiasedly.

There are several legal consents to be obtained, guidelines to be followed, and precautions to be taken in the narco-room, which I will discuss in detail further in another post.

1. The dosage itself is the biggest limitation in certain cases, that can raise a question in the court-room or to the human rights.
2. The subject's consent.
3. Any previous medical history, that may restrain this test.
4. If the person is already on medical treatment of similar drugs.
5. If the person is a drug abuser
6. Hypersensitivity to a particular drug
7. In many countries, it is still considered as a supportive tool in the criminal investigation, and many times is not admissible in the court (Human rights plays vital role here).
8. The success rate is not 100%, many subjects had been able to make false statements.
9. Right to self incrimination.
10. An analysis of a person without his or her consent will certainly undermine his or her individual rights

As the world is changing rapidly, the pattern of crime is also changing rapidly. It seems to be very difficult in the present environment, where the eligible educated offenders begin to replace the suspect with obsolete investigative methods. In this case, the investigative authorities need to change the procedure according to the social environment and criminal behavior, and this can only be achieved by using analytical methodology in the investigation process. Hence, this can be well achieved by Narco-Analysis in this context. But keeping in mind the legal implications on the test, it is well suited as a collaborative and supportive evidence in the presence of other physical, circumstantial, and testimonial evidences.