Careers in Forensic Science (Guide to your Forensic Career)

Forensic Science is the application of scientific principles in terms of LAW for the purpose of Justice. Whenever, we apply science to solve a legal problem it becomes forensic science. For instance, you encountered a red stain on the carpet. The first question that comes to your mind "Oh is this blood"? Now to answer this question you require number of scientific methods:

1. Whether it is Blood or Not?
2. If it is blood, then whether an Animal blood or Human blood?
3. If animal, then which species or which animal?
4. If human, then what is the blood group, male or female, DNA identification etc.

In the above example, we need a bit if chemistry (to test whether it is blood or not), bit of biology (species origin test, antigen-antibody reaction, DNA) and some time bit of physics (to identify the source and force applied).

There are various branches of forensic science including some very edge cutting:

1. Forensic Toxicology: Deals with the Analysis of the toxins (poisons) etc.

2. Forensic Pathology: Forensic pathologists determines the cause of death, manner of death, nature of injuries during medical examination (post-mortem).

3. Forensic Odontology: Application of dental science for legal investigations. A single tooth can be utilized to identify the individual.

4. Forensic Linguistics: Also known as language to the law. It is the application of linguistic knowledge and analytical methods to the forensic context of law.

5. Forensic Geology: Also called as Geo-forensics, is the study of evidence encountered beneath the earth like minerals, oil, petroleum, objects, dead bodies, fossils etc and used to answer questions raised by the legal system.

6. Forensic Entomology: Study of the different species of insects (arthropods) and their life cycles on the dead bodies or decomposed bodies to determine the time since death.

7. Forensic Engineering: Is the study of engineering principles to the investigation of failures or other performance problems like plane crash, building collapse, bridge collapse etc.

8. DNA Profiling: Also named as DNA Fingerprinting and is one of the major branch of Forensic Science, deals with the extraction, isolation, identification and comparison of DNA from the body fluids and other biological matter.

10. Forensic Archaeology: It is the field of forensic science which involves application of archaeological methods in the investigation of a crime to identify the related evidences and to reconstruct crime scene. Forensic archaeologist are employed to excavate and recover human remains, personal items, weapons, etc.

13. Forensic Ballistics: Deals with the study of firearm and related evidences in a shooting incident. A forensic ballistic expert is required to identify the type of firearm used, range of firing, direction of firing, link the suspected firearm with the incident etc.

14. Forensic Biology: Application of biology to equate a person(s), whether suspect or victim, with another person (victim or suspect, respectively) in a venue, object (or set of items).

16. Forensic Physics: It deals with a combination of ballistics, explosives, blood splatters, the measurement of density, index of refraction, and birefringence, force of impact, voice analysis, audio-video analysis etc.

19. Questioned Document Analysis: A questioned document examiners deals with the identification and examination of handwriting, signature frauds, fake currency, fake passports and many other such matters in legal investigations. It is the most commonly used branch of forensic science in current scenario due to increase number of cheque frauds, will/property frauds etc.

20. Dactyloscopy or Fingerprinting: Comparison of fingerprints, development and lifting of latents (hidden) fingerprints on the crime scene and on other objects, collection of impression evidences is the very crucial task dealt by the investigators.

You can be a 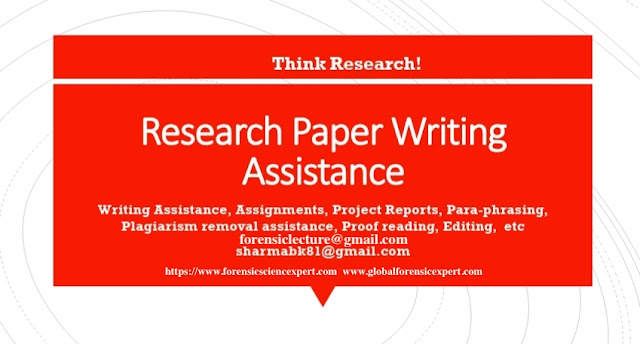 Email ThisBlogThis!Share to TwitterShare to FacebookShare to Pinterest
Labels: BloggerTemplate