Fingerprints prints can be defined as the friction ridges found on the epidermis of some animals and the Human beings on palmer (palm of hands) and the plantar (sole of feet) surface and are meant to provide the grasping power to hold something or to walk firmly. Fingerprints offer an infallible means of personal identification. That is the essential explanation for their having supplanted other methods of establishing the identities of criminals reluctant to admit previous arrests.

The science of fingerprint is superior to other in the field of personal identification due to many reasons, including the following:

·       Has served all the law enforcement agencies worldwide during the past 100 years to provide accurate identification of criminals.
·       No two fingerprints have ever been found alike in any of the human being.
·       They remain unchanged through out the life till death of a human being whereas the physical appearance may change from time to time.
·       Fingerprints are the very basis for criminal history foundation at every police agency.
·       It is the most commonly used forensic evidence worldwide - in most jurisdictions fingerprint examination cases match or outnumber all other forensic examination casework combined.
·       Continues to expand as the premier method for identifying persons
·       Outperforms DNA and all other human identification systems to identify more murderers, rapists and other serious offenders (fingerprints solve ten times more unknown suspect cases than DNA in most jurisdictions).


Due to their unique nature and permanency the fingerprints are widely used as a feature of personal identification. The science of using fingerprints as a method of personal identification is not new and has a long history behind it. Before the mid-1800s, law enforcement officers with extraordinary visual memories, so-called "camera eyes," identified previously arrested offenders by sight. Photography lessened the burden on memory but was not the answer to the criminal identification problem. Personal appearances change (http://www.onin.com/fp/fphistory.html).

The fingerprints are broadly classified in to Arches, Loops, Whorls and Composites. There are further sub classifications of these basic patterns but these forms the basis of the fingerprint science. The three patterns can be simply defined as follows:-

1.     Arches: - The pattern in which the ridges run from one side and make an exit from the other side without any backward recurvature. Over in all about 5% of the total fingerprint patterns are Arches. They are subdivided into plain and tented arches. In plain arch there is a small rise in the center resembles a hill or a hump. There is no delta present in an arch pattern. In tented arches, the ridges at the center have an upward thrust in the shape of a tent.
It is to be remembering that there is no core or delta found in the plain arch pattern and it is easiest pattern to identify. The ridge structure of plain arches may show all the components of finger patterns such as forks, enclosures, ridge endings, dots etc. 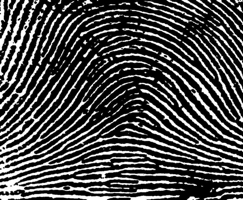 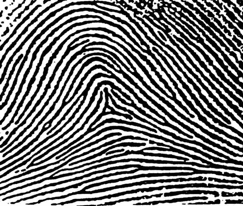 2. Loops: - In this type of pattern the ridges enter and exit from the same side with at least one ridge following this course. The recurving of the ridges is usually in the form of a hairpin that passes between the delta and the core, and finally terminates on or toward the same side of the pattern where it enters. As of records some 60-65% of all patterns are of loop type. A loop always has a ‘delta’ and a ‘core’. Therefore, it should be noticeable that there are four basic characteristics of a loopp pattern i.e. a core, delta, entry and exit of the ridges on the same side and a count at least one that follows this course. They are further subdivided into radial and ulnar loop. The Radial loops slant towards the thumb (or radial bone of the hand) where as the Ulnar loop slants toward the little finger (or the ulnar bone of the hand). The majority of the loops are the ulnar while the radials are the rare patterns. The ‘Core’ or inner terminus is the approximate center of the pattern. 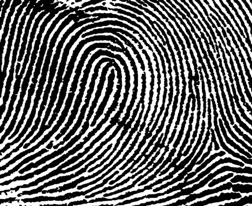 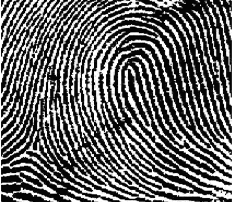 3. Whorls: - In such pattern at least one ridge must recurve and make a complete circuit around the core, and there are two deltas present. About 30 to 35% of all patterns are of whorl type. The whorl may be spiral, oval, or circular. An imaginary line when drawn between the two deltas must tuch or cross at least one of the recurving ridges within the inner pattern area.  Also if the imaginary line when drawn in the direction of core of the pattern should encounter another ridge at the right angles, that is only possible when recurvature is present. It is not necessary always that there must be two deltas present as in certain cases this requirement is not fulfilled but existence of recurvature is a must to classify the pattern as whorl. 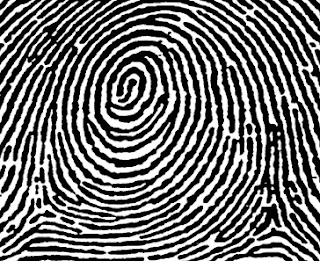 A. Central Pocket Loop: - The pattern can be identified as when the majority of the ridges follow the loop pattern but one or more ridges in the center or around the core recurves and forms a pocket. In this category when an imaginary straight line drawn between two deltas and if this line does not cross or touch any of the recurving ridges that lie between the core and the delta the pattern is classified as Central Pocket Loop. 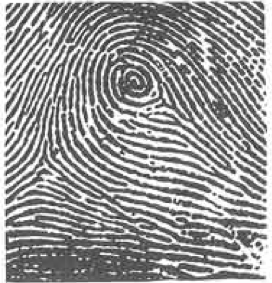 B. Twin Loop: -
As the name suggest ‘Twin’ means presence of two distinct loops, one surrounding or overlapping the other, and having the termination or outlet of the ridges representing the core of each loop on opposite sides, with two distinct deltas on both the sides. 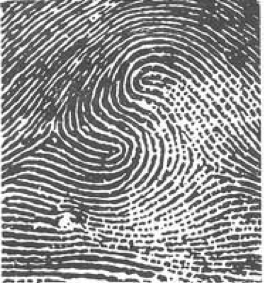 In the technical analysis of the fingerprint patterns some of the basic features i.e the class characteristics (Type lines, cores and deltas) and the individual characteristics (fork or bifurcation, island or enclosure, dot, ridge fragment or short ridge, ridge ending, bridge, cross over etc) are necessary and it is needful to become familiar with the procedure in recognizing and placing them.