How to Collect Handwriting Samples for Comparison? (Collection of Standards)


Handwriting of an individual is considered as the written speech, which is particular and specific to an individual. It is an acquired skill and a complex perceptual-motor task, sometimes referred to as a neuromuscular task. Each individual has its peculiarity in Handwriting formation; such characteristics are type of movement, line quality, speed and skill, rhythm, spacing between letters, word and line, slant, alignment, connecting strokes, size and proportions of letters, pen pressure, pen hold, pen position, and pen shading and coordination of writing muscles.

There may be various legal/disputed cases related to handwriting or signatures. It may be a case of forgery, disguise, an anonymous letter, etc. In such instances, it becomes crucial to compare the disputed handwriting/signature with the specimens collected from the suspect or victim to conclude. 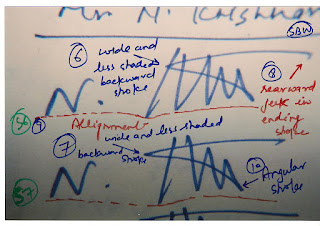 It is quite challenging for the handwriting expert to collect the proper samples (also know as exemplars or standards) to prove or disprove the authenticity of the source. The handwriting or signature samples are usually collected in three ways:

These are the writing samples obtained from the suspect or the victim on request.  Usually, request specimens are obtained by the handwriting expert/Questioned Document Examiner in the courtroom with due permission of the legal authorities; however, they can also be obtained by the handwriting experts on their letter-heads with his signature, credentials, and stamp along with with the signature of minimum two witnesses. Request specimens are best suited when the suspect or victim is available; however, in cases where they are not available, or the investigation is kept a secret, request specimens can not be collected.

Principles and precautions during the collection of request specimens

B. Writing instruments and paper should be similar to those used in executing the questioned documents. If the disputed matter is in ballpoint ink, the same should be used for the specimen collection as well, likewise for pencil and other writing instruments.

C. The writing format should be similar to the disputed document ( as far as possible). Considering a disputed signature on a bank cheque or any application form, it is always better to create the similar copies of the form or the cheques, to provide the same writing space to the suspect or the victim. This will maintain consistency in the handwriting and will aid in the examination and identification of specific handwriting characteristics easily without much efforts. Also, it will be an excellent tool to present and showcase the similarities in the courtroom.

D.  If the disputed writing is in text form, then the specimen should consist of the same text. The text should be dictated to the suspect/victim and should not be shown to them at any cost prior to the dictation. Else, this may influence the request specimens.

E. Any Abusive/obscene texts in the disputed text should not be dictated. However, certain non-obscene sentences or words can be selected and repeatedly dictated several times. Also, dictation should be interrupted at intervals. This will distract the mind of the author, in case he is trying to maintain the consistency in disguise or changing his/her writing.

F. Ask the person to write dates as well since the numbers can be a great tool for comparison, as well. No guidelines to be given for spellings, punctuations, paragraphing, etc., as this may be the characteristic feature of the writer to identify him and to compare with the disputed matter. Several cases have been solved based on such distinctive features as well.

G. The specimens should be collected in both standing and sitting positions. (if possible)

H. The suspect mustn't be told much in advance about the collection of the specimen. He should be given a surprise whenever possible. This will avoid the preparation time for him, and it will be easy for the handwriting expert to obtain unbiased specimens.

I. If the handwriting expert feels the necessity then he/she can collect the specimens in varying speed (Slow, medium, and fast). As many of the features like connecting strokes and terminal strokes are better studied and examined at varying speeds.

J. If the disputed writing is a signature, 10-30 signatures can be collected. If it is a text, then certain words and sentences can be selected to take minimum of 3 samples. There is no upper limit as the time permits.

A. These are the natural writing samples of the suspect written in normal course of his/her day-to-day work.

B. These may be collected from the official communications, letters to friends/relatives or maybe from notes of the diaries and other notebooks. The major advantage of such writing samples in forensic investigations is that, the writer isn't conscious about the writing that it can be used as an exemplar later on.

D. The selection of admitted writing should be done on the basis of the words used in the disputed document so as to see the similarities among initial, connecting and terminal strokes.

E. The writing samples should be contemporaneous (of the same time period) as far as possible as to the disputed document.

F. We also check for same writing instruments; but if not possible we just don't check for characteristics like pen pressure, shading, etc. in such cases.

Many times, the culprit prepares practice copies/carbon copies of the signatures and the writing that can be encountered in the premises of the culprit or maybe in trash bins which will act as chance standards. The other types of chance standards can be collected from the friends and relatives if they authenticate it.

Email ThisBlogThis!Share to TwitterShare to FacebookShare to Pinterest
Labels: BloggerTemplate